Goddess Katyayani is one of the popular forms of Devi Durga, who is the 6th diety among the Navdurgas.

The Goddess also acts as the preceding deity on the 6th day (Chaturthi day) of Navaratri.

Worshipping Maa Katyayani is believed to bring courage and wisdom to the devotees. Also, the Devi is considered as the bestower of health, wealth, and success.

Meaning of the Name Katyayani

Many Hindu scholars explain the name Katyayani as Katasya apatyaym stri iti Kathyayani, which means Katyayani is the daughter of Rishi Katya, who is none other than Katyayana.

As the Goddess was born as the daughter of Rishi Katyayana, she is called with the name Katyayani.

The iconography of the Goddess

Goddess Katyayani of Navadurgas is usually represented as the one seated on a lion and with four arms. She is shown holding a sword and a lotus with her left hands while holding a shield and showing the Abhaya mudra with her right hands.

The Devi Mahatmya describes the Devi as one with four arms, by which she holds a conch and a discus with her upper hands, while the lower hands showing the Abhaya and Varada mudras.

There is also a greater form of Maa Katyayani, which is represented with eight arms.

Some Hindu texts like Rupa madana and Maya Deepika mentioned Goddess Katyayani as the Mahishasura Mardini, the slayer of demon Mahishasura. In such representations, the Goddess is seen with ten arms and in the scenario of killing demon Mahishasura.

Even some medieval works like Kadambari by Bana Bhatta refers that the feet of Katyayani Mata were reddened due to the blood of demon Mahishasura.

What do Hindu Holy scriptures say about Goddess Katyayani?

Many holy scriptures had mentioned that Goddess Katyayani Mata was a form of Ambika.

In the Taittariya Aranyaka of the Yajurveda, the names of the Devi Durga like Katyayani, Vairochini, and others are mentioned in the verses.

Sacred scriptures like Devi Charitra, Rudrayamala Tantra, Shaivaagamas, and Navadurga puja rahasya mentioned this Devi as a form of Navadurga and some of the texts also gave the details about worshipping of those goddesses during the Navaratri days.

There are also several mentions of this Goddess in Bhagavatha Purana, which refers to the people of Vrindavana worshipping the Goddess. Also, the Purana mentions that Gopi’s of Krishna used to worship this Goddess.

Moreover, several stotras of Devi mentioned the name of this Goddess as synonyms to Durga, Chandi, and Shakthi.

Mantra and Hymn for Goddess Katyayani

Holding in her hands the shining sword Chandrahasa, O the Goddess who rides on a Lion as her vahana
O Goddess Katyayani, please bring me auspiciousness, O Devi, the slayer of Danavas

However, the story differs from the story of Mahishasura Mardini, slightly on the birth of Goddess.

At the same time, several Hindu theologists believe that Katyayani is a goddess who accompanied the Goddess Mahishasura Mardini, just like Goddess Kali and Kaushiki in the battle with demon Mahishasura.

Let’s now dive into the story

There lived a sage named Katyayana, who is an ardent devotee of Parashakthi. He worshipped the Goddess in many ways and wished to have her as his child.

So, he had done great penances and worshipped the Devi with utmost devotion to get the Goddess Shakthi as his daughter.

Pleased by the devotion, Devi appeared before Rishi Katyayana and told him that your wish will be fulfilled in the near future.

On the other hand, Demon Mahishasura got the throne of the Asura Kingdom from his father.

He had done a great penance on Brahma and got several boons along with the boon of invincibility on all the beings, but he didn’t include lady or women in that list, thinking that they won’t be a serious threat to him from them.

Later, with the mighty powers he acquired, he raised a war against Deva Loka and defeated Indra and brought Deva Loka under his control.

Unable to bear the illegitimate actions of Mahishasura, all the Devas went to the God Shiva and Vishnu and asked for their help.

All of the gods, with their Shakthi and Tejas, created a Goddess. This had happened in the hermitage of Katyayana Maharshi.

With respect to the birth, the Devi is named as Katyayani, who is also considered as Mahishasura Mardini.

The Goddess was with enchanting beauty, as many lokas were under the control of Mahishasura, news of a lady with immense beauty reached the ears of Mahishasura, and several of the messengers and ministers of his court thought that she could be a perfect match for their king.

So, they sent a messenger to the Devi and said about their proposal of marriage with Mahishasura.

In reply, Devi smiled and said, first go and say your king to come and do the battle with me and defeat me in it, then I can take your proposal into account.

Listening to the sharp words of the Devi, they came back to Mahishasura and said about it.

Mahishasura angered and went to the battle, where he and his asura warriors were crushed by Devi Mahishasura Mardini or Katyayani.

Some say that Devi Katyayani helped in the samhara of Mahishasura and other demons in the battle, just like goddess Kaushiki and Kali.

Another Great Story Related to Goddess

There is also another story related to birth of this Goddess.

Once Devi Parvati, while playing with her consort God Shiva, she blindfolded the Supreme God for fun.

All of a sudden, the worlds filled up with darkness. Goddess Parvati realized the mistake and took her hands back.

Even though she is the Great Goddess involved in the creation of the Universe as Shakthi, she thought to follow the rules of Dharma, such that to show the world the importance of Dharma or righteousness.

So, the Devi took a new incarnation to reunite with God Shiva again.

She was born as the daughter of Maharshi Katyayana, an ardent devotee who wished to have the Goddess as his daughter.

As the Goddess was born as the daughter of Katyayana, she is called in the name of Katyayani.

As the Devi is growing up, Sage Katyayana as his duty, thought to reunite the Shakthi with Shiva.

So, he sent her to Kanchipuram and said to worship God Shiva.

The Shakthi in the form of Katyayani Devi too thought its time to reunite with Shiva and even to agree to the wish of her father in this incarnation.

Devi went to Kanchipuram and worshipped the Shiva Linga made of sand under a mango tree.

God Shiva thought to test her dedication by creating a great flood. Seeing it, Devi hugged the Saikatha Linga (linga made up of sand) in order to protect it from the flood.

Seeing the devotion of Goddess Parvati, God Shiva appeared and married her.

In this way, Goddess Parvati took the form of Devi Katyayani and reunited back with Shiva.

There are several temples across India dedicated to this goddess. Here are some of the famous temples of the Devi: 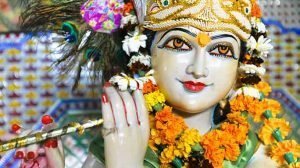 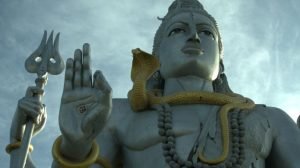 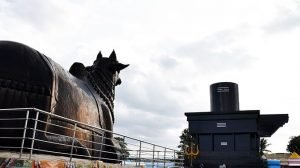 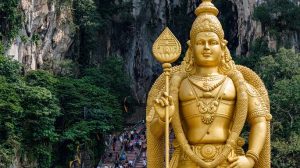 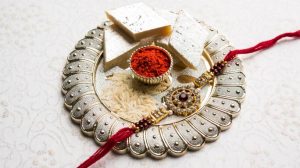 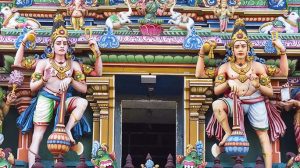